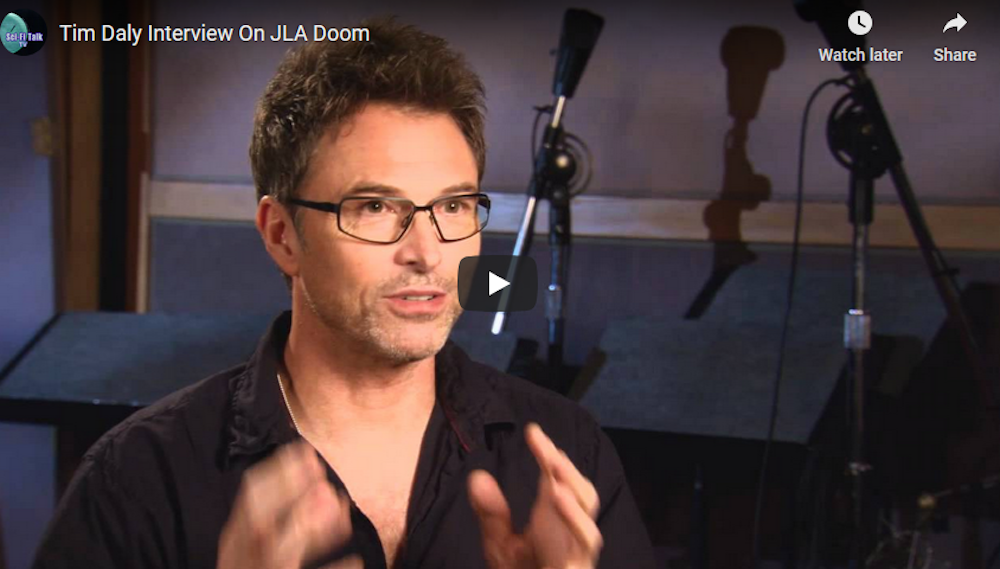 Tim Daly, the fan’s choice as the quintessential voice of the Man of Steel from his days portraying the title character for the landmark Superman: The Animated Series, once again supplies those All-American tones in Superman/Batman: Apocalypse. The ninth entry in the popular, ongoing series of DC Universe Animated Original PG-13 Movies

Produced by Warner Premiere, DC Entertainment and Warner Bros. Animation, Superman/Batman: Apocalypse will be available as a Blu-ray Combo Pack, Special Edition DVD, On Demand and for Download.
Daly was the voice behind the world’s ultimate super hero for 52 episodes of Superman: The Animated Series and several animated movies, all the while starring in one primetime television series after another – from eight seasons on Wings to memorable roles on HBO’s The Sopranos and From The Earth To The Moon to his current ABC hit, Private Practice. The Emmy nominated actor made his feature film debut in Barry Levinson’s 1982 classic Diner.

Amongst the many activities surrounding the film’s upcoming release is “Destination Apocalypse,” an interactive online promotion that allows fans to get even deeper into the mythology of Superman/Batman: Apocalypse. Fans can access “Destination Apocalypse” at http://DestinationApocalypse.com and explore the many sections including games, quizzes and information about film. Fans can even send Kryptonian messages to their Facebook friends. In each section, participants virtually “check in” and earn badges to unlock an exclusive video clip from the movie. In addition, earning badges for participating in the various activities in each section help to unlock exclusive movie poster downloads.

Daly joined the festivities at the World Premiere of Superman/Batman: Apocalypse in Los Angeles on September 21 at The Paley Center for Media. The Metropolis, er, New York City-born actor offered his thoughts on a number of subjects – ranging from the Superman/Batman dynamic and the importance of a great villain to his love of farming – in a playful interview. And here’s what he had to say …

What did you find unique and/or fresh about this latest Superman-Batman vehicle?

TIM DALY:What’s interesting about the relationships in this film is that Superman and Batman are really on the same page. They are united and they only give each other a very modest amount of grief, whereas at other times they’ve been a little more at each other’s throats, and more dubious about the other one’s methods. And Kara is, perhaps, Superman’s last surviving relative. So he feels very protective of her, and sort of glad to have someone who has had or is about to have a similar experience as he’s had coming to a different planet. So it’s kind of touching, really. He’s very paternal towards her. He really wants her to do well and to stick around.

It’s nice to see his powers used in connection with something personal. He’s not saving the planet, he’s not saving Metropolis. He’s not saving Lois. He’s saving a blood relative. So it’s that kind of deeply personal feeling. I do enjoy that in the script.

If Batman is a loner, how would you classify Superman?

TIM DALY:I think Superman’s a loner. Without a doubt. I think he recognizes that he has this responsibility, because of the power that he has, and that he has to bear it by himself. And to make sure that he is using it for good and not for evil. He has to keep in check his human emotions, though he’s not really a human – because those are the things about living on Earth that can get us in trouble. Greed, power, love — all those things that take us off the tracks. In this script, Kara asks him if he’s ever regretted having his power, and he has a one word answer: no. We actually spent quite a bit of time trying to find the right level of “no” to play, because I don’t think Superman is 100 percent sure about that answer. Or he hasn’t always been. He’s been through a lot, finding out how different he was from everyone else, and having to essentially live a double life.

As different as they are, what is it that you think creates the dynamic for Batman and Superman to essentially be each other’s best friend?

TIM DALY:I think part of it is that they’re both super heroes, so they share that in common. They understand and forgive the other one for living a double life, because they both essentially have to do it. And more often than not they’re on the same side. Batman, despite his darkness, is essentially a power of good. It’s interesting — it’s kind of like sometimes you wonder why big movie stars are best friends with huge movie stars. I think the answer is that they live such a specific life that’s so odd and so difficult that they tend to gravitate toward people who have an understanding of that, and forgive the fact that they have to be private or have to wear disguises, or come in the back door of the place so there’s not a big fuss made over them. I think that’s sort of the same kind of relationship for Batman and Superman.

So when you and Kevin Conroy to go dinner in Manhattan …

TIM DALY:No one gives a damn. No one could care less (he laughs).

Do you see these Superman-Batman pair-ups as buddy films?

TIM DALY:I think maybe in a bizarre way. I mean, when you think about great buddy films, like Butch Cassidy And The Sundance Kid, these guys are willing to die for each other, and yet they’re constantly giving each other a hard time. And they frustrate each other to no end. Think about a movie like 48 HRS. Ultimately that’s a buddy film, but it starts out with Nick Nolte and Eddie Murphy beating each other up and abusing each other in all kinds of different ways. I think these Superman-Batman films are part of that genre. The oil and water who become inseparable.

How do you interpret Superman’s perception of Batman?

TIM DALY:I think Superman likes Batman. In his own private way, he gets a kick out of the fact that he can count on Batman being cynical and pessimistic, and that he sort of relies on that probably in the way you rely on certain friends or family members to do certain things that you shake your head and go, “Oh, jeez.” It’s sort of comforting. And in this script, he’s come to trust Batman to have his back. And he has a genuine concern for him. So I think he likes him fine.

Do you now feel some sense of ownership of Superman?

TIM DALY:I think I feel a greater sense of ownership now than I ever have. I think it’s because I’ve embraced the fact that it’s so important to so many people. People take Superman very, very seriously. I think that when I first started doing the series, I took it seriously when I recorded the role, but I maybe judged the audience a little bit. I wondered “Why are people getting all excited about Superman? It’s just a cartoon.” But I’ve realized that it’s not my place to judge. People love this character and take him seriously, and follow his every movie, and if that’s their thing, then they have every right to that. And I should serve that with all my might. So I understand that now, and I try to respect the character’s importance to the fans.

What really surprises me is when I’m talking to someone, and someone else standing close by will say, “Tim Daly? Superman!” And I’ll say, “How did you know?” And they say, “Your voice.” And then I realize, oh yeah, that makes sense. But clearly they’ve become attuned to my voice, and the fact that my name is attached to Superman. But still, it always surprises me.

Is Darkseid a perfect example of “the bigger the villain, the better the story” adage?

TIM DALY:Villains are really what give comic stories their flavor. Honestly, I think Superman would be quite dull without a really great villain. Batman, maybe not so much, because he’s such a twisted character himself. He’s struggling with a lot of inner demons. But Superman is the kind of guy who’s impossible to hate, because he’s a guy’s guy, and he’s straightforward. He can be a little sarcastic and he has a wryness about him. But he doesn’t have a lot of dark corners. So I think that contrasting him with someone like Darkseid, who’s a real badass villain, absolutely makes the script more interesting.

Do you have a favorite villains?

TIM DALY:I guess my favorite would have to be, and I say this very selfishly, but it’s Bizarro. He’s sort of a hapless villain, a sort of demented Superman replicant that Lex Luthor wants to use for his own evil purposes. He’s kind of almost innocent in a weird way. He has no idea what it is he’s doing, but he’s doing a lot of damage. And I guess I like him the best because I got to play him.

What entertained you as a kid?

TIM DALY:I had two sources of entertainment. One was television and the other was my own imagination. I was a kind of a lonely kid – I spent a lot of time by myself, and I spent a lot of time outside. So I would wander around in nature with this huge imaginary world. And I had three imaginary friends. And there was a whole lot going on in there that no one else really knew about. But that entertained me. I wasn’t sad, I was just a loner. And then there was television – especially cartoons like Bugs Bunny.

And what entertains you now?

TIM DALY:I haven’t been bored since 1970. I play the guitar, which entertains me a lot. I play golf. I watch a little bit of TV with great relish. I go to the theatre. I play around with my kids. I am not very good at sitting still, so having activity entertains me. I futz with stuff. I build things and fix things. I like to garden.

Another thing you and Batman, er, Kevin Conroy have in common. Working in the garden. What’s the foundation of your attraction to gardening?

TIM DALY:Oh my God, if you’ve ever grown your own food, you’d know. I had a moment about 15 years ago when I first harvested my own potatoes. I had some primordial Irish experience. It was a cold fall day, and it was kind of misty, and I was muddy. I reached into the ground and I took the potatoes out of the ground and sort of held them to the sky. Like, “Food, my food, my people.” (he laughs) It’s great.I farm in Vermont. A lot of people tell me I shouldn’t talk about this because it makes me sound too much like Mr. Green Jeans, but I have a garden with lettuce, broccoli, peas, beans, tomatoes, carrots, lots of herbs, parsley, basil. Cauliflower, which never grows. Eggplant is a disaster for some reason. Corn, squash — stuff like that.Maybe it’s because it’s just a little miracle. You take some little seed, you plant it, and it becomes this beautiful thing, and you can pick it and eat it, and it sustains you. Just a little miracle. I love it.