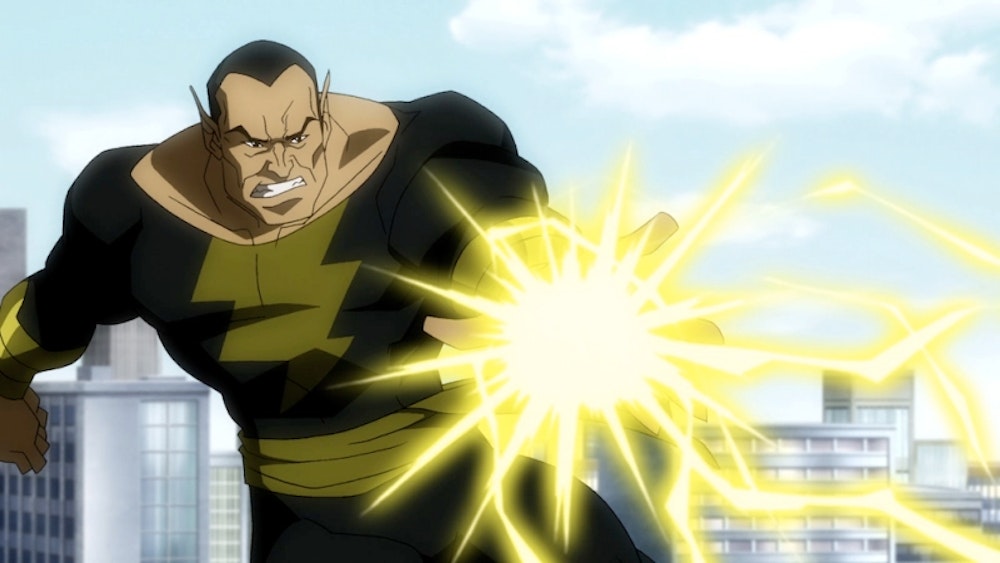 Joaquim Dos Santos brings his unique directing style to four diverse superhero segments with the DC Showcase Original Shorts Collection, anchored by the never-before-seen Superman/Shazam! The Return of Black Adam. Warner Premiere, DC Entertainment, Warner Bros. Animation and Warner Home Video expanded the realm of superhero storytelling beyond the popular DC Universe Animated Original PG-13 Movies with the introduction of the DC Showcase, a series of animated shorts featuring characters from the celebrated DC Comics vault. DC Showcase animated shorts initially appeared as special bonus content on the slate of DC Universe Animated Original Movies. The 10- to 12-minute films include The Spectre, Jonah Hex and Green Arrow. All three titles are presented in extended formats along with the first-ever release of the 24-minute

Bruce Timm (Superman Doomsday) is executive producer and Joaquim Dos Santos (Justice League,Avatar: The Last Airbender) is director of the first series of DC Showcase titles. Michael Jelenic (Wonder Woman) wrote the 24-minute script for Superman/Shazam! The Return of Black Adam. Other shorts included on the DC Showcase Original Shorts Collection: The Spectre – A detective story with an ethereal twist featuring an otherworldly character. The short is written by Steve Niles (30 Days of Night), and the voice cast includes Gary Cole (Entourage) and Alyssa Milano (Charmed). Jonah Hex – The tough-as-nails bounty hunter always gets his man – until someone else gets to him first – in this case a murderous madam who wants to steal more than just his bounty from Jonah Hex. Based on a story from the award-winning Jonah Hex comic series, and scripted by world-renowned author Joe Lansdale. The voice cast is led by Thomas Jane (Hung), Linda Hamilton (The Terminator), Michelle Trachtenberg (Mercy, Buffy the Vampire Slayer) and Michael Rooker (Days of Thunder). Green Arrow – At the Star City International Airport to pick up his girlfriend, Oliver Queen is forced into action as Green Arrow to protect the 10-year-old Princess of Vlatava from his old nemesis Merlyn the Magnificent and the League of Assassins. Greg Weisman (Young Justice) pens this action-packed tale, which features the voices of Neal McDonough (Desperate Housewives) as the title character and Malcolm McDowell (Entourage) as his foe. Dos Santos took time this week to chat about the four shorts that are available everywhere on Blu-ray and DVD. Here’s what the director had to say …

Let’s start with the obvious — do you have a favorite among the four shorts?

JOAQUIM DOS SANTOS: It’s Jonah Hex. I just think tonally it all came together. It’s a nice, clear cut homage to spaghetti westerns, and I thought Joe Lansdale’s writing was pushing the envelope – in a good way – as he dealt with themes that were a bit more mature. The overall art direction was the most consistent — the color direction was really strong, and I’m especially proud of the look and feel of the saloon. It’s got these great, warm colors that make it feel lived in. You can try to write that scene and you can try to draw it and art direct it, but this really translated – Madame Lorraine’s saloon felt like a real place.

Do you have favorite moments in each short?

JOAQUIM DOS SANTOS:I love our big monster homage in The Spectre when the make-up artist gets his come-uppance, only because I’m a huge fan of horror films and we got to put a little homage to all my faves. Plus, The Track Team, our composers on the DC Showcase, did a great job of capturing that late 70s, John Carpenter, Goblins, Susperia vibe.In Green Arrow, the fight on the conveyor belt between Green Arrow and the thug was a lot of fun. I boarded that sequence myself, adding little martial arts disciplines that I thought both Green Arrow and the thug would employ. And it was kind of cool that Green Arrow didn’t necessarily win the fight – he got his bell rung by the thug.For Shazam, I like the opening sequence with Billy waking up in the morning. It’s such a great story point that here’s this kid basically squatting in a dilapidated apartment complex inhabited with thugs and ladies of the night, and yet he still has this chipper outlook on the world. It was a ton of fun to see that scene fully realized – when he’s doing pull-ups, he’s snapping his fingers, as if to say “I’m not doing too bad here.” I like the juxtaposition of the contemporary, rundown setting against his cheery attitude.

Where did you hide the Easter Eggs?

JOAQUIM DOS SANTOS:There’s a bunch of them. The Spectre has a lot of my favorite monsters in the backgrounds, like Regan from The Exorcist. The werewolf that attacks the make-up artist is a tribute to Michael Jackson in Thriller. Plus we get a little homage to Christine. In Jonah Hex, Red rides into town past a sign that says “Lansdale Mortunaries” – a little nod to our writer, Joe Lansdale. In Green Arrow, Oliver Queen’s phone list on his cell shows names like Bruce, Clark, Diana – all members of the Justice League. And in Shazam, there’s a story in the newspaper that’s about Dr. Silvana.

What attracts you to the Superman/Shazam story?

JOAQUIM DOS SANTOS:It was tough because Bruce (Tiimm) had already done the quintessential animated Superman/Shazam battle on Justice League, and it was incredible. For me, not having them fighting with each other was a big point. And the fact that it was really sort of a play on Billy’s insecurities and delving deeper into his backstory was far more important than creating a big slugfest. We do have a lot of action, but we get a lot of the cerebral stuff into a short amount of storytelling time – including the death of Billy’s parents, the way he looks up to Superman as an ideal, his being a foster kid, overcoming his insecurities. It’s all in there in just 24 minutes of film.

Do you have a favorite casting choice?

JOAQUIM DOS SANTOS:James Garner. My hero. It was just awesome to meet the man. He wasn’t necessarily the obvious choice – I think people often think of the wizard Shazam as being regal and maybe having a British accent. But to me, it makes perfect sense to have James Garner. Shazam is real Americana, and James Garner sort of represents that aspect of the entertainment industry. He’s an icon. You can’t mistake that voice for anybody.

What did Michael Jelenic bring to the Shazam short?

JOAQUIM DOS SANTOS:Michael was awesome. Everybody sort of expected to see a script that would at least start out with Superman and Shazam in a fight, but Michael didn’t go the obvious route. He cut right to Billy dealing with an internal struggle, and used Superman as the representation of the good aspect of that struggle, and Black Adam as the other direction. And he did it all in 20-something minutes. It was a monumental task to fit that amount of epic in that amount of time.

Did you need to be sold on any of the characters?

JOAQUIM DOS SANTOS:I was not a fan of The Spectre growing up – he was probably a little before my time – so I wasn’t as enthused as I probably should have been. But Bruce (Timm), being a huge fan, kind of gave me an insight into the character, and I realized I hadn’t quite given him the chance he deserved. I’m a huge horror fan, and when the spin got out there that we could set the short it in the 1970s, and make him this sort of a Freddy Krueger type who dispatched his victims in over-the-top, ironic ways, and then I read Steve Niles’ script, I was pretty much locked in.

How did you approach the art direction on the four shorts?

JOAQUIM DOS SANTOS:They’re not drastically different in design style, because it all got filtered through me, and I’ve got a really straight forward anatomical style. But they are different in their tone and in their color direction. The Spectre has a very Grindhouse feel – we put a dirt and grain filter effect on after the animation to add even more to the ambience of the period – plus some of the tones are pretty muted. With Green Arrow, you’ll notice there almost seems to be kind of a green filter over everything – it’s all a different shade of green. With Jonah Hex, the color palette is much more sepia-toned, and that’s to reflect the old spaghetti westerns. Shazam is the most straight up, super heroic story we’re telling, and the palette definitely represents that vision. It’s a much more of a contemporary story with brighter colors on the whole. I tend to have more of a de-saturated color palette than what most people have come to expect. Things just don’t look bright and shiny to me. In the real world, things aren’t as bright and shiny as they are in animation, so I tried to bring more of the naturalistic color palette to these films.

Do you prefer the short form or long form of animated story-telling?

JOAQUIM DOS SANTOS:I do like the short form a lot, and coming off my previous project where I was doing shorts also, I think this allowed for me, just as a storyteller, to fit in enough content without it feeling like it was overflowing, and without it feeling like it was too crammed. After Showcase, though, I’m definitely ready to tackle something a bit longer form. The shorts are awesome, though. What I like is that they’re nice little packages – it’s like eating your candy at a movie. You’ve got your Raisinettes and your Sour Patch stuff, and you love them, but every once in a while you want to sit down to a full meal. These are really good candy.

Special thanks to Gary Miereanu