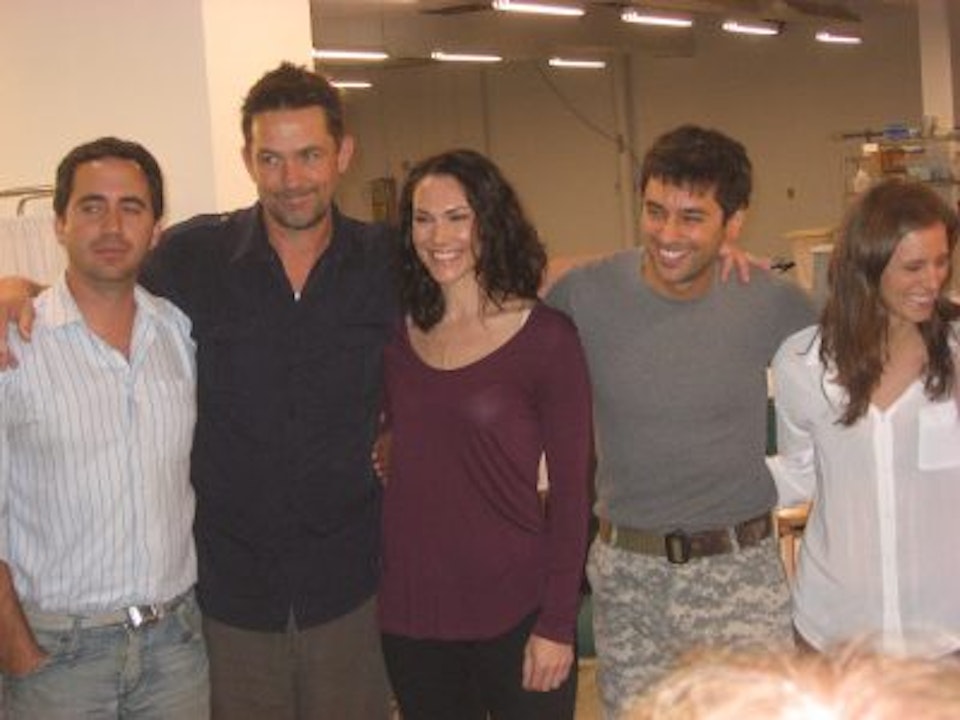 As I write this, there is snow falling outside my window. Fitting about a series that takes place in the Artic. I was lucky enough with other reporters to attend the SyFy Digital Press Tour in Montreal and we visited the sets of their new series, Helix. There was an informal Q And A with the cast and creator moderated by Mark Stern of the SyFy Channel.

Mark Stern: You have a unique background. How did you come to this script and how did you meet up with Ron (Moore) and what was that relationship

Cameron Porsandeh: As I said to a few of your prior to this I was an economist at the World Bank Federal Reserve.What I primarily concerned myself with was international development with all different countries. I loved what I did.And I think what I did was very important actually.There was one experience when I was in Ethopia. There was a boy watching TV and the boy was cleary gay in a community where that was not tolerated.I know this because multiple people pointed him out.What was interesting was that this boy was watching Will And Grace on television.You could see his connection with that character.At that moment my only thought was, “There are all kinds of ways to make the world a better place,one of them is politics.Economics is super important to, I really believe that.So are the Arts and entertaining people has tremendous value too.” That’s what pushed me towards television.

In terms of this particular story, when I first started thinking about Helix, there were a few things that I wanted to do.I wanted to tell a viral story. I think each generation has a fear.The one before us was that computers were going to take over the world.Before that were nuclear weapons, but for our generation viruses are in the human zeitgeist as a threat.And unlike the two things I just alluded to, viruses are everywhere.They’re everywhere in this room, they’re inside of us right now.I think that was terrifying and I still do. I knew that I wanted to set it in an exotic location.And I don’t know how many of you have been to the Artic Circle, in my opinion, the closest place to the moon on Earth.It’s desolate.It’s hauntingly beautiful.And it’s mysterious.I knew that I wanted to create a facility that..when I was a kid, I was obsessed with labyrinths. When you walk through this facility tour, I think Brad Turner (Executive Producer who was also our guide that day) did an excellent job. The mythology of the base is also hand in hand with the mythology of the show.That was super important to me.The final thing was that I wanted it to be a fast paced story. So we built into to it that one episode equals one day.What I loved about that is that we’re going to start our show and end our show in less than two weeks. Those are the bones of the story.Once I had the story and the structure thought out, we brought on Ron Moore.At Sony they said if you could work with anyone who would you want to work with ? And I said Ron Moore. They sent it to Ron and he was very gracious and he wanted to be involved. What he brought to it was quite masterfully in my opinion was, he really constructed with me an overall mythology.Not only would it connect our first season but all of our seasons.It was akin to what I responded to Battlestar Galactica in a beautiful way.Then we pitched it to Mark (Stern). And to Mark’s credit, this is an unsual show.He took a chance on it and I’m really grateful.I’ve said that many times.

Mark Stern: You can say that one more time.

Cameron Porsandeh: (To Mark) On behalf of all of us, I thank you.

Mark Stern: This was an easy one for us because it was so interesting.It was perfect for us (SyFy Channel) Because we have a large ensemble cast like Battlestar, I thought we go down the line and talk about your character and what they do.

Billy Campell:  I play . Alan Farragut. Alan is the head of a remarkable team from the Center For Disease Control who are called north to deal with the viral outbreak.But things are a bit more complicated than they at first seem.Not only on the base but also within our little unit.

Hiroyuki Sanada: Welcome to the Artic. I play Dr. Hiroshi Hatake , the Director Of Research. He’s he a little mysterious. Actually I don’t know who am I yet. (Laughter) Maybe you can enjoy the show.I am so excited working with a great crew and cast.I will be great entertainment that no one has ever seen.

Kyra Zagorsky:  I play Dr. Julia Walker. I’m one of the top scientists of the CDC.I’m also Alan (Farragut’s) ex-wife.

Mark Ghanimé: I play Sergio Balleseros, a major in the Army.With these kind of shows, there’s three components, the government, the doctors, the military.So I’m part of the military with an agenda of my own that we might see or might not see.Watch and find out.

Dorothy:  I play Dr. Sarah Jordan who is one of the scientists at the CDC on Farragut’s team.Sarah is young and ambiotius, over achieving scientist who is very very accomplished and is on her way to becoming one of the leading viral pathologists of her time.

Meegwun Fairbrother: Bonjour. I play Daniel Aerov which is Hatake’s Innoq adopted son.He is also the Head Of Security at the base.If something goes wrong, I’m the guy that takes care of it.Cleanup on aisle four. (Laughter)  I make sure it runs smoothly.

Catherine Lemieux: I prefer to be called Cat. I play Dr.  Doreen Boyle. I like to be often referred to as Doctor.I am a vetenarian and not always recognized as such.I’m also a epizoologist and am on Alan’s crack team.We have a past together, Alan and I.Very happy to see you all here today.

Neil Napier: I too like to be called  Cat. ( Laughter) I play Dr Peter Farragut brother to Alan Farragut.I’ve been up at base for a couple of years.I’m a research scientist and I have a complicated relationship with my dear brother and his ex-wife.

HELIX SET VISIT Q AND A
On this stage of the production how much back story do you have on your characters ? If you don’t have any backstory how does that effect how you approach it ?

Mark Ghanimé: We’ve been getting the scripts as we go. A lot of television does that.Next week is like Christmas, you get a new script and get to read all the fun stuff that you do. We have an arc that we have been laid out at the beginning. You have an idea where your character is going to go but a lot gets fleshed out in the process.We’ve been left up to our own backstories aside from the guide we were given at the beginning.The directors keep us in line making sure that the story that we have created for ourselves works with the story that they are moving forward with.

I was wondering about the science and the medical component of it.Who is your science advisor on the set who is helping you out ?

Cameron Porsandeh: We have some people from the CDC that we speak to regulary.As I said before, it is science fiction so we pushed the bounderies of these whenever we can. Everything is routed in science. That was always very important to us.A lot of science fiction is twenty thirty, fifty years in the future. We’re trying to think three to five years.Everything is grounded to the best of our abilities. It’s not only reflected not only in the dialogue but everything you saw in the set tour today.It should all be right and we’ve made great efforts to insure that it is.