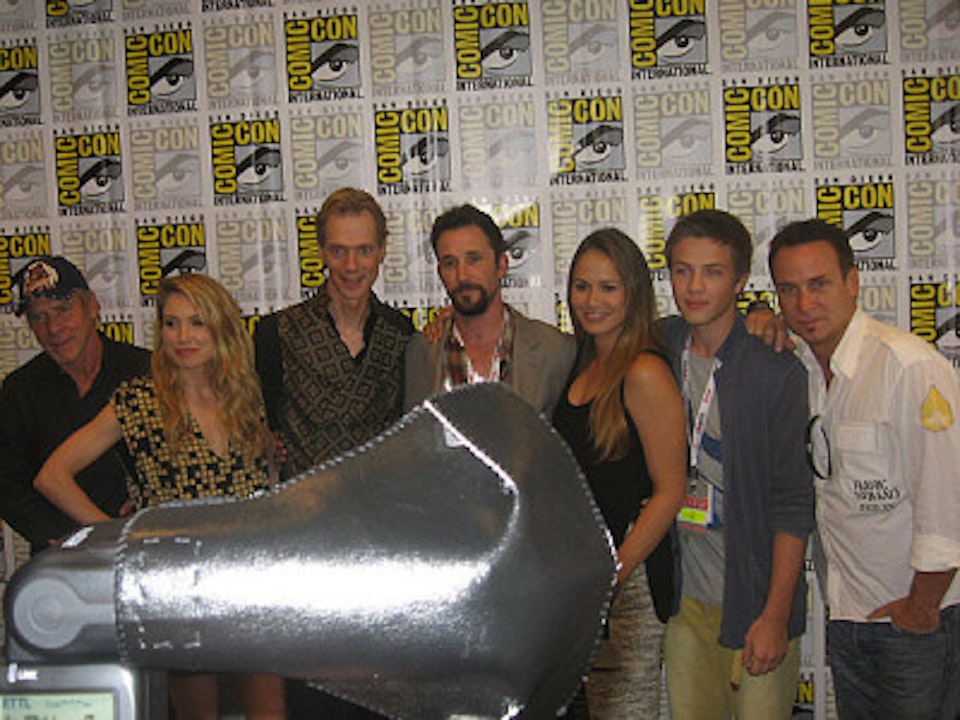 Noah Wylie: The way we look at it and I don’t want to speak for Will necessarily, although I frequently do, is that we’re sort of the mother and father of this group and we alternate roles depending on the episode. Sometimes he calls the shots and I’m the moral conscience and sometimes it’s the other way around.Getting the promotion to Colonel and President allowed us the opportunity to flip the dynamic that we had been playing where he becomes my conciliary for a change which is really fun.

Will Patton: At the end of the first season, Was it me or you that said, “What ever is that we’re doing,We should do it together as a team.” And I think that you tell me because I don’t want to speak for you either, but since the beginning, Tom has developed a little more armor and Weaver has opened up a little bit.

Noah Wylie: There’s been a little transference absolutely. I haven’t seen the finale but it’s pretty strong. We shot it. It was friggin to shoot.

Will Patton: I’m thinking about the fourth season.

Noah Wylie: He’s doing Armageddon.
Will Patton: Yeah Right. I remember shooting them but sometimes I forget what show is being shown.It’s hard to remember because we shot episode eight…

Noah Wylie: I had to be clean shaven for some of those bits.It’s actually one of my favorite shows we’ve done yet.

What about the arc of your character ?

Noah Wylie: It’s an arc but it’s got sort of a wiggle to it. The first season was about the deconstruction of an intellectual, taking a guy who led a very cerebral life and now has to be physical. That was accomplished and it’s just been sort of this pendulum switch between a guy who has been a chronicler of history to a guy who is an architect of history.Eventually arriving at this place of a warrior-stateman hybrid that we haven’t seen too much before. Somebody who has these statesman like skills of a politician but can also lead and command in battle.Sort of Andrew Jackson and Thomas Jefferson mushed together.

Will Patton: Kind of reminded me of Henry Fonda and Jimmy Stewart last year.

How do you get motivated for your scenes ?

Will Patton: You probably have your own, I have my own. We like the same stuff, I think.

Will Patton: It became kind of a thread. We used it to take them where we were going. It was fun to take them that way. It really did fit.

Tony Tellado: And the alien races, maybe allies maybe not. Sure caused some tenstion between your characters.

Will Patton: I still think I was right (Weaver about the aliens)

Noah Wylie: I have to give a lot of credit to Remi Auberchon, (Executive Producer) .When we started the season throwing that many story lines at the screen, I thought it was too much for an audience to get their mind around. A seventh month time jump, an alien alliance, I’ve been promoted to President, I’ve got an alien baby, Hal’s got the eye bug. There was a lot of stuff up there.But it was a big ball of yarn that I thought unraveled pretty nicely over the course of the season.

Noah Wylie: In fact Josh Chamberlin was a name that was thrown around the first meeting I had on the show with Steven Spielberg and Robert Rodat at Dreamworks.You guys know Josh Chamberlin.He led the 20th Maine in the Battle Of Gettysburg.Held the little Roundtop.

Will Patton: I always thought of the thing that turned it around.

Tony Tellado: Been there. It’s awesome.

Will Patton: Me too.

Noah Wylie: Exactlty. They were a lot of parallels when the show first started to the American Revolution. Being an American history professor at Boston University as my back story, I sort of boned up on the American Revolutionary War. I had already been a big Civil War buff. And Will gave me Matterhorn on the Vietnam War.

Will Patton: I found since then that there are much better books on Vietnam.Dispatches. All of the Vietnam books are good. The guys that are really there.Tim O’Brien.

Tony Tellado: Any inklings of a new season ?

Noah Wylie: You know I haven’t even sat down with the creatives yet. They have broken the basic skeleton of the season to Mr. Spielberg and he is apparently very happy.Michael Wright, the president of TNT called me and said he was overjoyed to hear to where we are at this part of the process.I’ll get my meeting with the writers in a week or so. We start shooting Season 4 second week of September.And some bad news..Will.

Tony Tellado: What has Doug Jones added to the family ?

Noah Wylie: Quite a lot. I was saying earlier when we first created the character of Cochise in concept, it was going to be a totally digitized character.We were going to be acting to tennis balls on the edge of a stick. But then we thought, he’s supposed to be like a friend to Tom. We’ll get an actor who just reads the lines so Noah doesn’t have to react to nothing.Then they went all the way and got one of the best performers you could possibly ask for in Doug Jones.

Will Patton: The guy who plays the skitter too. I want to bring up Keith. He has a funny last name.

Noah Wylie: Both those guys are incredibly uncomfortable in their outfits. They stay in them for hours and hours.

Will Patton: Just imagine a guy in that skitter costume.

Noah Wylie: And yet they are able to convey humor, emotion. All sorts of complex things through eighteen layers of latex. Personally Doug is a real nice guy and a great addition to our ensemble.

Will Patton: I just watched Pan’s Labyrnyth with my niece last weekend.

Noah: We do love the horses on our show. We can ride horses all day long.Don’t get me near any motorcycles ever again as far as I am concerned.

Tony Tellado: I liked the moving ahead in time this season.

Noah Wylie: You can fill in the blanks which is a really nice device. I also think it pays homage to a very sophisticated audience who has seen enough content.That’s why we started the invasion six months into it in our pilot. Steven felt that everybody’s seen the show where everybody goes to work and there’s this sound and everyone looks at the sky and the ships come. Everbody’s scared.There’s panic. He wanted to skip all that.Audiences know all that.They already have that movie in their head.So we start six months down the line and we did the same thing this year which I think is very cool.

Colin Cunningham Interview
What does the new season bring for Pope ?

“Well, what’s interesting about the show this year is that things in Charleston have ‘settled’. Yes, the 2nd Mass is still at war, but they’ve also carved a bit of an existence for themselves. And within their new community, people need access to the simple things in life. Provisions, hard to find items, gear, ammo etc. And this is where Pope comes in. Basically, he’s in charge of the black market. If you need something, you come to Pope. In addition to that, he is also running a ‘bar’ by the name of Pope’s Nest or simply ‘The Nest’. Where soldiers and civilians alike can unwind with a drink, a lady of the evening or perhaps just a good game of cards.
How many episodes will we see you in ?
All ten.

What’s your reaction to the great lines that Pope gets ?

It’s a happy one. It certainly was never intended when we began, but we got lucky in that a few of the lines worked in a fun way. Next thing you know, the writers were inventing some really fun stuff.

I kind of see at times that Pope is the voice of the audience asking questions we want answered.Does that resonate with you as well?

Pope has always been the voice of reason. Straight up and direct. That line of thinking may be coming from an unlikely package, but Pope always speaks the truth.
Has any of the producers discussed your character’s arc with you ?

At the beginning of Season Three, the writers brought me in to discuss what they had in mind, and if I had any ideas to share. And I was quite surprised. It was one of the classiest and most thoughtful things I’d ever experience as an actor. And it’s rare.

How is like working with Doug Jones who plays the new Alien ?

I’ve known Doug for some time and the man is a class act. A really wonderful actor and it was a real pleasure to watch him work. He had quite the job in that he had to ‘balance’ out the fact that his character is the shows first alien ally. Everything from the way he stood or moved, right down to the smallest gesture. (Forget about the fact that the man spent 5 hours in the make up chair every day.) Only a Doug Jones could have pulled it off.
Last Season everything was ramped up a whole notch. What tone does Season 3 have ?

Well,like most of us… I’ve still yet to see all the episodes. But, after a fast and epic Premiere, I think the season settles down and becomes perhaps the darkest of them all. The threat is no longer just the Skitters. We now have enemies ‘within’ the Second Mass.

One of the areas that you have branched out in your career is now producing and directing. What led you in that direction ?

The fact that the inside of my trailer isn’t all that exciting. I think making your own movies is simply an extension of your love of the craft.
Can you update us on your movie, Drawing Dead ?

Still in the works. But because of everyone’s schedule and with Falling Skies being so very time intensive, we’re still putting the pieces together so that we can really knock it out of the park.

You’re listed in the credits for The Historian with a great cast including William Sadler and Glynnis O’Connor among others. Can you tell us you play in this film ?

I play a college professor by the name of Fletcher. A sort of genius, pot smoking hippie intellectual with a great passion for all things Homer. Miles Doleac (the films writer/director) is a kindred spirit and working with Bill Sadler and Glynnis was simply exceptional.
Being a filmmaker, are you looking in to alternate ways of showcasing your work like a YouTube Channel or raising money via Kick Starter ala Veronica Mars.

Those types of things are always on my mind. But, I try not to talk about what I’m ‘going to do’, as it totally dissipates the energy needed to do it.

In line with that how does showing your work digitally like online films or on demand feel to you in addtion to Theater distribution and DVD’s.

I love it. The fact that I can shoot something this morning, and have it up in front of an audience by lunch is just mind-blowing. And so to me, it’s ‘the more the merrier’. Anything that can get your work seen by others is pure magic. Wether it be Youtube or a screening at the Manns Chinese Theatre on Hollywood Blvd. And it’s especially cool if your movie doesn’t suck.”

Special thanks to TNT and San Diego Comic Con