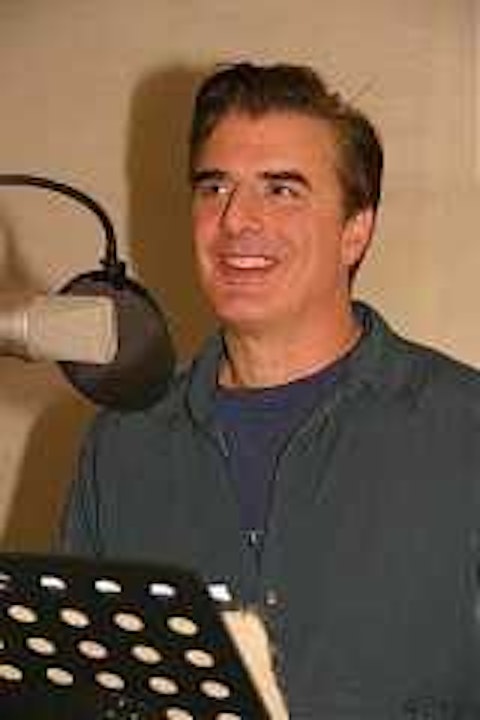 If Sex In the City fans were confused over their see-saw love affair with Chris Noth’s Mr. Big, comics fans will endure an equal amount of trepidation over Noth’s latest performance – as the voice of a “good” Lex Luthor – in Justice League: Crisis on Two Earths, an DC Universe Animated Original PG-13 Movie from Warner Premiere, DC Comics and Warner Bros. Animation.In Justice League: Crisis on Two Earths, a “good” Lex Luthor arrives from an alternate universe to recruit the Justice League to help save his Earth from the Crime Syndicate, a gang of villainous characters with virtually identical super powers to the Justice League. What ensues is the ultimate battle of good versus evil in a war that threatens both planets and, through a diabolical plan launched by Owlman, puts the balance of all existence in peril.
Justice League: Crisis on Two Earths is an original story from award-winning animation/comics writer Dwayne McDuffie (Justice League). Bruce Timm (Superman Doomsday) is executive producer, and Lauren Montgomery (Wonder Woman, Green Lantern: First Flight) and Sam Liu (Superman/Batman: Public Enemies) are co-directors. The full-length animated film will be distributed by Warner Home Video as a Special Edition 2-disc version on DVD and Blu-Ray™ Hi-Def, as well as single disc DVD, and On Demand and Download.

Noth has had a lengthy television presence as both Mr. Big in Sex and the City and as Mike Logan in Law & Order and Law & Order: Criminal Intent. He can currently be seen starring opposite Julianna Margulies in the CBS drama The Good Wife. Justice League: Crisis on Two Earths represents Noth’s inaugural dip into the animated pool.

In Los Angeles to record his 100-plus lines as Lex Luthor, Noth took time during the marathon session to discuss his first animated role. Without further ado …

You’ve had an extensive career in a number of acting mediums – is this really your first animation voiceover experience?

CHRIS NOTH: I think I did about three lines of Mike Logan on Family Guy. That was a quick little gig. The character (Stewie) on the show carries a picture of Mike Logan in his wallet, so I was very flattered by that. But that was just a few lines – so Lex is pretty much my first real animated role.

In that case, can you describe what your first “actual” animation voiceover experience was like?

CN: I felt I had an instinct for it, and it was a lot of fun. It’s an interesting technique and, like any medium, whether you’re doing radio or certain kinds of narrative voiceovers for stage or movies, it has its own sort of rules and performance values. I think the choices had to be bold and succinct and clear. To me, it appears that super heroes have to be powerful, but it also has to be real. You have to make bold choices and go all the way through with them. That’s true with a lot of acting anyway. But with animation, it seems to me there’s nothing coy about it. The acting has its own subtleties. So you have to find that balance. And as long as you go with that instinct, it’s a blast.

Did you take a different approach to this Lex Luthor – a good guy Lex – than you would’ve taken with a typically villainous Lex?

CN:I was extremely excited to be playing the ultimate villain from my youth. I remember how Gene Hackman portayed Lex Luthor with such great delight in the films, and I thought I’d be getting that Lex. So I was surprised to see that in this script, Lex is actually on the right side of the law. It required a whole new thinking on my part on how to approach him. I mean, he’s a super hero who’s in this very complex, parallel universe. He’s actually trying to save all of reality from being destroyed. So I just took that adjustment and said, “Wow, I need to get up to date on my super heroes.” I’m guess I’m a little bit retro. (he laughs)

Do you feel any special significance to be joining the canon of actors – Gene Hackman, Kevin Spacey, Michael Rosenbaum, Clancy Brown – to have brought Lex Luthor to life?

CN: Initially when I heard about the role, I thought about that great tradition of actors associated with Lex. And I really feel honored to be a part of that group. But this is a complete departure from those performances. This time, Lex is on the right side of the law. He’s worlds away from the old Lex.

You’ve done your share of Shakespeare. Can you characterize Lex within the context of some of the great literary or stage heroes/villains?

CN:Not this Lex. I find super heroes to be more archetypes of values of courage and fortitude and things like that. It’s interesting to me that the new world of animation, compared to when I was growing up, is so much more diverse in its characters. There’s so many more of them, and it’s a much more complicated world. The old comic books that I grew up on had these characters that were in many ways Shakespearean. They were very big with their evilness in the same vein as Richard III in Shakespeare. Those characters relished being bad, and that’s always fun to play.

How did you find working alone in a sound booth versus playing off other actors?

Did it get easier when Bruce Davison joined you at the microphone?

CN:That was even more fun because I know Bruce and it’s always more fun to work off another person. Sandy Meisner, the great acting teacher, used to say that what you do doesn’t depend on you. It depends on the other fellow. In other words, they make you respond. So when Bruce came in, there was a new kind of energy that I sort of relished. I didn’t have that many scenes with him, but he was a lot of fun and I think he made a great President.
As you are new to animation voiceovers, you’re also new to the direction involved. How did you find Andrea Romano’s direction?

CN:(Animation) is very quick, it’s to the point, and very on message, and you have to just go with it. Andrea was extremely helpful to me to get some of the tone and in knowing what you have to keep in mind with what’s happening to the character in the scene. Whether it’s an intimate scene or there’s a lot of action, she keeps you on point. So she’s a very good field marshal.

DC SUPER HEROES and all related characters and elements are trademarks of and © DC Comics. (s09)